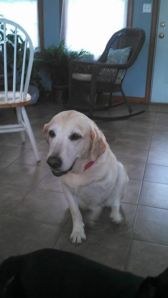 In an earlier blog “Dog Eat Dog World” I believe I had mentioned that sometime I would tell the story of our three legged dog. My heart was touched from the first I had heard of her and I was in love from the moment I laid eyes on her. Even our pets are a special part of God’s plan for our lives. Never an accident in how they become a part of our families.

The first I heard of Chloe was through a dear friend and coworker of mine. We were in a committee meeting at the hospital of which she was the head of. She was fighting tears that morning and having a hard time getting our meeting rolling. Through her tears she decided to provide the explanation of her emotions to all that were in the room. She started to explain that her sister had the sweetest dog literally jump into her minivan as she was loading up the family a few days prior. The dog had a broken front leg, was emaciated, had obviously just had puppies, and had no collar. The dog immediately won my friend’s sister’s heart and she decided to try to help. Her family called shelters and checked with neighbors to try to find the owners. No owners were found. There was a sign that they came across that puppies were found near the area where they live. The scenario gave the appearance that the momma and puppies were all dumped out in the country and left to fend for themselves. We can only speculate as to how Chloe obtained her broken limb.

Unable to find an owner of the dog her sister decided to take her to the vet to see what could be done for the leg. A very expensive emergent surgery could possibly be performed at another pet hospital further away. Finances are a factor when the dog is your own, but to spend thousands on a strange dog it just wasn’t a feasible option for them. There also was the risk that it was already too late to surgically repair the bones of the leg. The vet could set one of the bones, but not both. Casting the leg was not an option. The only option was to keep the leg splinted and to try to keep the dog sedate and with the splint on for weeks to allow the bones to heal. Her sister quickly became exhausted with trying to keep the splint on the dog and the dog calm. They were at the point of thinking that the dog may need to be euthanized because all the shelters were full and it seemed that no one could or would take her in. My friend had also met and fell in love with the dog hence her reason for tears during the morning meeting.

A few days later one of my friends from church posted a story about a dog her neighbors had that needed a home. She went on to tell the story which sounded very similar to the story of the dog my friend from work shared. I messaged my friend and said this sounds so similar to a story I just heard. Through our conversation I learned that she lived across the street from my work friend and it was the same dog. My work friend had taken the dog to her own home to care for since our meeting at work. Upon this discovery and going on about what a small world it is I called my friend from work, Leslie. We talked at great lengths about the dog. She had quickly become exhausted with trying to keep the dog sedate with splint intact as well. Her boys had not yet had a dog as a pet and she wasn’t sure that the dog would be the right fit for her family.

Her voice perked as she said “Anita you sound like you might be interested in this dog!” We had just put our cat down about a month before and just had one small dog at the time. We had actually been thinking about getting another dog and just hadn’t started looking at the animal shelters yet. Rescuing a dog with no home was already on my heart as the best option for us. Dogs are so adaptable and potentially having a dog with only three legs was not an obstacle for us. We are accustomed to the weird and unusual in the Lucas homestead. A three legged dog made perfect sense.

The girls and I went to meet the dog and were in love. In addition to the broken leg her ears had sores from being bitten by flies and her eyes were weepy with a gooey drainage. Our church friend and neighbor of my friend Leslie knew of someone that could help financially if needed. That person couldn’t take the dog, but wanted to help who ever could with expenses. After bringing her home we tried to keep the splint intact to no avail. Giving her the name of Chloe we soon realized that Chloe was quite the Houdini. The first day in our home of course was a work day for us so we had to leave her. We tried to keep her in a pen in the garage. She escaped the pen, climbed over bicycles, a wagon, and a Barbie car, lifted the cracked window with her nose, busted out the screen and jumped to the ground about four feet below. She stayed in the yard and greeted my mother as she pulled in the drive with broken leg dangling and a smile on her face. The splint was left behind in the pen that she destroyed. We quickly learned that she was fine staying inside the house where our presence was felt even with us not there. Having rewrapped her leg at least a dozen times I saw firsthand or first pawed that this leg of hers was not going to heal. My friend already had a vet appointment scheduled at the same vet we go to that Saturday morning. We kept that appointment. The vet was so happy that someone had agreed to take her in because he really didn’t want to euthanize her either. When he took the splint off of her leg the look on his face demonstrated what I already knew in my heart. There was just no healing that would happen. We decided to amputate and have her spayed that next week. Doing both surgeries at once we thought would be the best option for Chloe and financially. We would have had to go into debt pay for all of it and were so grateful for the financial help with the cost of the amputation. It took the work of five families to rescue our sweet Chloe all together.

The morning I took her to the vet for her surgeries I wondered if she would still love me afterward. In such a short time we had already developed quite the bond and the concern that I would lose her trust was weighing on me. The vet allowed me to call and check on her a couple times and they were happy to give the update that she had come through surgery fine. She had to stay the night for observation with the amputation being such a vascular surgery. The next day when I picked her up she was a different dog. She was brighter, so happy to see me, the weeping of her eyes was completely gone, and she appeared to have a radiant grin. My tears started to flow as soon as I looked her in the eyes. “This indeed is a very special dog” I thought to myself. Healing was a piece of cake for her. She had already grown accustomed to walking with three legs due to the break. Chloe gives deer, squirrel, and any other living creature a run for their money despite only having three legs. She falls often, but gets back up without missing a beat. Digging has been no problem she just uses her one front paw and has even managed to dig up a mole or two. One morning I looked out the front window saw her dig and catch a mole. She flipped that mole around the yard like it was a squeak toy.

It was the burden and pain of what was broken that was making her sick. Once what was broken was completely removed she was able to fully heal and be happy. She is left with the obvious scar of what she has gone through. Every day she is a reminder to me that in our lives there is only One who can rescue us from the brokenness in our lives. Jesus provides the amputation we need to completely remove the burden of our sinful broken hearts. His forgiveness alone will remove our sin that separates us from God our Creator. The day I picked Chloe up from the vet reminds me of the day when I will look full into the face of Jesus. There will be no more weeping of my eyes and my smile will radiate joy! We are often left with emotional and sometimes physical scars to remind us where we have been. Jesus bears the scars to His hands, feet, and side as a reminder for eternity of where we have been and what He did to bring us out of our brokenness. We can continue to carry the burden of our brokenness leading to death and eternal separation from God or we can ask Jesus to free us from the burden of our sin and shame leading to eternal life in the presence of God.

One thought on “Love, Life Lessons, and a Three Legged Dog”